A downloadable game for Windows, macOS, and Linux

Aster's a simple girl, at her core. All she really wants to do is enjoy her new life at uni, join a club, and spend every possible waking moment playing Magica Fantasia Online (she's not addicted) with her online crush Starsiren.

She's gonna tell her, OK? Just... when they meet up for MagiCon. Honest.

However, a teeny tiny complication arises on her first day at uni, when Aster just so happens to bump into Maristela, the single prettiest girl she's ever seen in her entire life.

And she's not just pretty. Mari's smart, she's funny, and Aster would happily listen to her ramble for hours about whatever the heck she wants to, if only she had a little more courage to do so.

Torn between the friend she's loved forever, and the new girl who it feels like she's always known, Aster faces the toughest decision imaginable, and she's not even been here for a week!

A game about love, new experiences, and the fact that nerdy neurodivergent girls are cute and you should date them.

GOD Y'ALL DID SUCH A GOOD JOB. MMPH.

Now I'm all lonely and yearning. This is all your fault

UGH. THE CGS. THE DIALOGUE. THE GAY PINING. THE LJFDSA;LKSADJF;LKSADJF;LKDSAJF;LKSAJFD;LKF

I am frothing at the mouth.

Glad you enjoyed! Thanks so much <3

Hey, pat yourselves on the back, this is neat! The interface hangs together very coherently, the game sections gesture just enough towards the UI of an MMO without being over-faithful and overwhelming, and you use the images of web pages and the text-entry box creatively—several of those made me grin. The script has a proper sense of different registers for different characters, & for Aster's inner voice vs her speech, too, and that's not as easy to do as good writers make it look.

Thank you! We were really happy with how the visual aspect started coming together once all the contributions were added. The majority of the UI was done by Tan so huge thanks to them for the hard work!

The text-entry box and google searches and stuff were a blast, they seem to be a favourite which is so so nice to hear cause we were SURE we were putting hours of effort into a joke that'd be skimmed past each time lol.

And thanks so much for the comments on the writing, getting everyone's voices right was definitely the thing that took me the most time when I was initially coming up with the script so it means a lot to hear it landed right, thanks!

This was an absolute delight from start to finish! Huge kudos to the entire team for bringing another precious yuri visual novel to this world.

The stargazing scenes brought back so many warm memories of when me and my best friend started dating. I guess all gay ladies have the same brain cell that compels them to go stargazing in October lmao

Also every google search Aster did sent me cackling XD

Thank you very much! I'm so proud of everyone's great work on this, and it means a lot to all of us to hear such lovely comments!

LMAO aw that's blessed, glad we could help you relive some fond memories then! Clearly it's just a shared braincell thing, like aquarium dates or something

LOL TY those were so much fun to put together. Also took a ton of effort from Vhalesa for like, 5 seconds' worth of joke so big thanks to her!

Loved it!! I honestly thought it was completed due to its status being "Released".  Still, I am excited to know what happens next :))) I want to see how their "first" meeting would be.

Yeah same here, I felt a bit sad to be surprised in middle of a story with “this great book was only a demo, sowwy !” :(

so sorry about that!! the team is working hard to finish the game!! thank you so much for enjoying and youll hear from us again very soon!!

I’ll be waiting for it of course ! T’was quality, even if I’m really not into astronomy, it’s quite a feat :D (may be gay magic)

So glad you liked the finished game as well! We gave our best to make the full version as enjoyable as possible :D

I'm also not into astronomy, but gay magic makes everything interesting enough, haha. (Or we can just be like Aster and think some of the constellations are cool because of anime.) 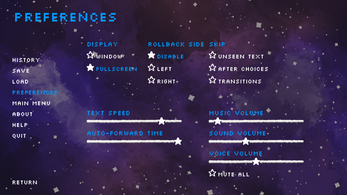 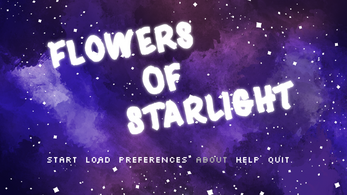 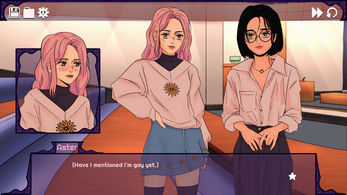 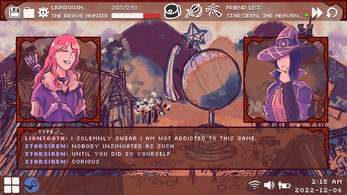 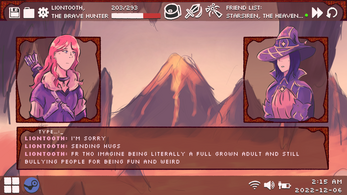